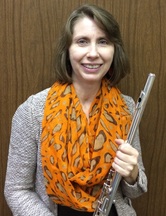 Michelle has been a member of the Bensenville/Wood Dale Symphonic Winds for over 30 years. The band has toured and performed throughout Europe including Spain, Italy, Portugal, Germany, Switzerland, and Russia. In addition, the group has recorded four compact discs under the label Deff Records. Since 1985, she has been a private flute teacher in the Chicago area and surrounding suburbs. Currently she teaches at York High School, Elmhurst, Thomas Middle School, Arlington Heights, and since 1991 has taught at Schaumburg High School. Michelle is owner of Lewis' Flute & Piccolo Shoppe in Villa Park, a music store catering to flutists, which opened in September 2003.

Traveling, gardening, hiking throughout Illinois and Wisconsin, and volunteering for St. Sophia's Forgotten Felines are activities that bring Michelle enjoyment, and on any given evening you can find her settling down with a good book and one of her cats.

Naomi Matsunaga holds a Master of Arts in Music from Northeastern Illinois University, where she served as Graduate Assistant. She studied oboe with Takahisa Shinmatsu, Ray Still, and J. Ricardo Castaneda. She has appeared in the Northwest Indiana Symphony, Illinois Symphony and Illinois Philharmonic Orchestras. In February 2011, she was invited to host her oboe solo recital at the Official Residence of the Consul General of Japan in Chicago.

Naomi also holds a Piano Pedagogy Certificate from Elmhurst College, where she studied the piano under the direction of Linda Camp. She has been a staff pianist of the Midwest Conservatory of Music and accompanying for student recitals and various music competitions. 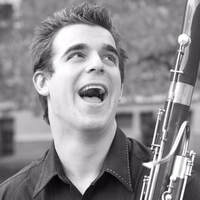 Mr. Andrew Marlin, is a freelance bassoonist and teacher throughout Chicago. He can be heard on a variety of musical platforms throughout the city. These platforms range from orchestra programs, opera productions, and chamber music series.

As a passionate advocate for music education, Mr. Marlin maintains a successful bassoon studio throughout the Northwest Suburbs of Chicago. He currently serves as bassoon faculty at all three Maine Township Schools, John Hersey High School, and Schaumburg High School.

Mr. Marlin’s former students have continued on to some of the finest music schools in the country with competitive scholarship. Some of which include: Northwestern University, The Peabody Institute at Johns Hopkins, Roosevelt University’s Chicago College of Performing Arts, University of Illinois Urbana Champaign, and more.

Mr. Marlin is a graduate of Roosevelt University’s Chicago College of Performing Arts where he received both a Masters of Music and a Professional Artist Diploma in Orchestral Studies. He also graduated from the University of Washington, Seattle with a Bachelors of Music. During his various studies, Mr. Marlin was able to study with Dennis Michel and David McGill from the Chicago Symphony, Lewis Kirk from the Lyric Opera, and Seth Krimsky from the Seattle Symphony.

Most importantly, Andrew Marlin is overjoyed to be apart of the team here at Schaumburg High School.

Sally Gerber is an experienced musician who has been teaching private clarinet lessons in the Northwest suburbs for 25+ years. She received her bachelor’s degree in music education from Augustana College in Rock Island, Illinois.

Sally works diligently to help her students achieve their musical goals. In the fall, instruction is given to students for school band auditions and the ILMEA district music festival. Several of her students have performed in both the district and all-state festivals.   Sally’s students also learn solos for the annual solo and ensemble festival, college auditions, and her student recitals.

Sally started teaching Zoom private lessons in March 2020 and in May organized and prepared four on-line recitals. Sally and students learned video editing skills to produce the Zoom recitals viewed by parents, students, and family members.
​
Many of her students continue to perform in college and have gone on to pursue music degrees. She hopes that all students will continue to love music throughout their lives. 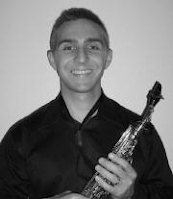 Eric Goluszka is a saxophonist and educator in the Chicago area. He is an active performer in a wide variety of genres including traditional and modern classical, jazz, salsa, and an assortment of popular styles. As a soloist, he strives to present a diverse selection of music in his recitals, often juxtaposing avant-garde saxophone works with baroque transcriptions. His command over contemporary techniques (such as circular breathing, multiphonics, and slap-tongue) has influenced the composition and dedication of new works for saxophone. Eric has performed throughout the Midwest United States, Canada, Southern France, Sicily, and Thailand, both as a soloist and as a member of ensembles such as the New Edmonton Wind Sinfonia, Rockford Symphony Orchestra, the Devil’s Own Saxophone Quartet, and Orquesta Energia Salsa Band.

In 2003, Eric received a Bachelor of Music degree with a performance emphasis from the University of Alberta, in Edmonton, Alberta, Canada. While there, he studied with renowned saxophonist Dr. William Street and performed in masterclasses for top modern composers and saxophonists such as Gavin Bryars and Jean-Marie Londeix. Eric received a Master of Music degree from DePaul University, where he studied with Susan Cook. His other major teachers have been James Kasprzyk, Matt Olson, Tim Aubuchon, and Jeremy Ruthrauff.

Mr. Goluszka is in high demand as a saxophone instructor throughout the Northwest Suburbs of Chicago. His students have received first place medals at solo and ensemble festivals and have been selected for IMEA district and all-state honor bands. Eric has been teaching saxophone lessons at Fremd and Schaumburg High Schools since 2005, Hoffman Estates High School since 2008, Notre Dame High School since 2009, and Conant and Metea Valley High Schools since 2010. In addition to working with the saxophonists at these schools, he also leads woodwind sectionals at Fremd. 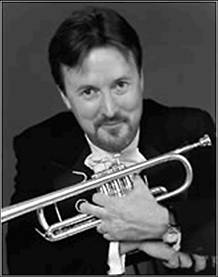 Paul Semanic is a member of the Rockford Symphony and the Chicago Bach Ensemble.  He has performed with Grant Park, Elgin, Northwest Indiana, Knoxville and Southwest Michigan Symphonies.  He is the Artistic Director and Principal Trumpet with the Stonegate Brass Quintet and the Brass String Chamber Ensemble.  He has been a featured guest solo artist on the WFMT broadcast of the Dame Myra Hess Memorial Concert series and is the Trumpet Soloist each year for downtown Chicago’s “Do-It-Yourself-Messiah”.  Paul studied with the world renowned brass section of the CSO (Chicago Symphony Orchestra) while performing with the Chicago Civic Orchestra, the training orchestra with the CSO.    Mr. Semanic has taught private trumpet lessons at the University of Tennessee, University of Chicago, North Central College, Benedictine University as well as trumpet lessons and master classes at numerous high schools.   Paul also enjoys teaching Tai Chi and Chi Gong (the Science of the Breath) which removes stress and provides an excellent balance of good posture and energy through relaxed deep breathing.  This provides a relaxed approach for trumpet performance and teaching. 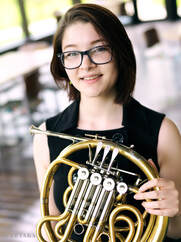 Momo is devoted to creating new sounds and opportunities for unique and meaningful co-creation. Having grown up in Evanston, she is currently completing her master’s degree in horn performance at Northwestern University, having received her BM summa cum laude at DePaul University. She directs a laboratory for musical and personal exploration through a studio of beginning and intermediate level horn students. Most recently, she is exploring the intimate vocal flavor of solo horn accompanied by jazz guitar, as well as developing a series of improvisatory “games” to practice joyful authenticity and spontaneity in musical expression. Momo is a founding member of the Braeburn Brass quintet and The Achelois Collective, and has performed with local ensembles such as the Elmhurst Symphony Orchestra and Music of the Baroque. She currently studies under professors Gail Williams and Jon Boen.
​
Momo’s other artistic outlet is painting. Her works, which range from bead-embroidered sea life to contemporary/abstract styles, have been exhibited in two public shows, and are featured in private installations across 3 continents. Momo enjoys working with her commissioners to create original, affordable art. 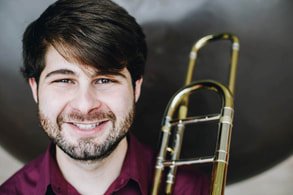 Robert Hackl-Blumstein is a freelance trombonist and music educator active in the Chicago area. In 2019, he completed a master’s degree in trombone at Northwestern University, where he studied with Michael Mulcahy, Timothy Higgins, Doug Wright, Randy Hawes, and Christopher Davis. He previously studied with Joseph Alessi at Juilliard and received his bachelor’s degree in 2017.

In addition to his in-person and online trombone lesson studios, Robert maintains an active performance schedule. He is a member of the Millar Brass Ensemble, an associate member of the Civic Orchestra of Chicago, and a regular substitute with the New World Symphony in Miami Beach, Florida. From July to August of 2019 Robert performed alongside top musicians from around the world as a member of the Verbier Festival Orchestra in Switzerland. In the summers of 2017 and 2018 Robert had the privilege of being a Tanglewood Music Center fellow, working with members of the Boston Symphony Orchestra. 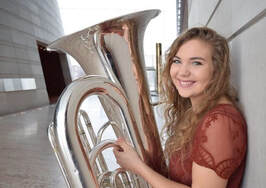 Serena Voltz is an active freelance tuba player and low brass teacher in the Chicagoland area. She draws on her studies at Northwestern University (B.M.) and DePaul University (M.M.), where she learned from some of the most world renowned brass pedagogues including Rex Martin, Floyd Cooley, and Gene Pokorny. Her orchestral experience includes work with the Civic Orchestra of Chicago, Kenosha Symphony, Racine Symphony, and Festival City Symphony amongst others. She also performs in a variety of chamber and solo settings ranging from baroque to contemporary. 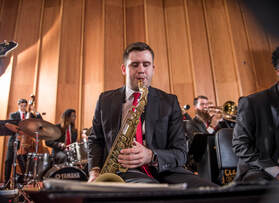 Rob Nordli is a Chicagoland based educator and saxophonist. He has shared his music in Germany, Mexico, and all across the United States. As both a student and professional, Rob has accompanied international acts such as Manhattan Transfer, The Temptations, and The Four Tops. In the Jazz Scene, he can be seen performing with his group Rob Nordli Jazz Quartet, and various Chicago land big bands such as Shout Section Big Band and Blues Shift Big Band. Rob can be heard on Shout Section’s latest album “Swingin’ On The Stand” (2019).

​In May 2018, Rob received the Masters of Music in Jazz Studies from Northern Illinois University. While in attendance, he was awarded a graduate teaching assistantship while serving on the Graduate Council, Curriculum Committee, and the Graduate Student Advisory Committee. His teachers include Geof Bradfield, Mark Colby, Reggie Thomas, and Greg Ward.
​
Contact Information:
rjnordli@sbcglobal.net
​(630) 398-1996